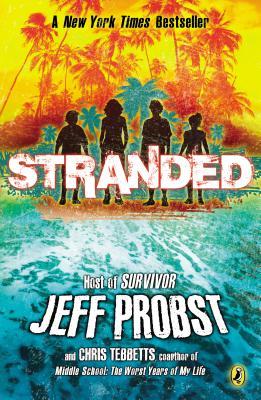 A family vacation becomes a test of Survival!
It was supposed to be a vacation - and a chance to get to know each other better. But when a massive storm sets in without warning, four kids are shipwrecked alone on a rocky jungle island in the middle of the South Pacific. No adults. No instructions. Nobody to rely on but themselves. Can they make it home alive?

A week ago, the biggest challenge Vanessa, Buzz, Carter, and Jane had was learning to live as a new blended family. Now the four siblings must find a way to work together if they're going to make it off the island. But first they've got to learn to survive one another.

This is the first installment in the series that brings the excitement and peril of the Survivor TV show to junior fiction.  An adventure series perfect for grades 4-7, readers can follow along with with the four kids as they learn to know and trust one another, and as they discover that you can't always predict how you will react to a disaster.  This quick moving adventure begins a few day into a bonding boat trip (that isn't going very well), but soon not getting along is the least of their worries.  A large storm threatens their safety on the boat and soon enough they are fighting for their lives. They will have to learn to listen and work together. They will find out which of them has the skills they will need and that stubbornness and ego can be as dangerous as their strange surroundings. Soon they will discover if they are strong enough or smart enough to survive being stranded alone on a jungle island.

Stranded 2: Trial by Fire continues the adventures of Vanessa, Buzz, Carter and Jane.  The boat wreck they were using for shelter has been washed out to sea with many of their supplies.  Now they have to start over finding shelter, food and water.  |There are dangers on the island and many challenges...getting along and work as a team being a big one..wild boars and trying to make fire are among the others.

The third installment finds shipwrecked siblings still fighting to survive.  Eleven days down, and no end in sight. It’s been days since Buzz, Vanessa, Carter and Jane were stranded on a deserted island in the middle of the South Pacific. Four kids left to fend for themselves. No adults. No supplies. They have managed to make fire and even found food. But they’ve just lost their only shelter, and quite possibly their one chance at being rescued. Now they’ll have to venture even deeper into the jungles of Nowhere Island just to stay alive. But the island holds secrets of a dark past. With danger lurking at every turn, they must rely on each other like never before it they are going to survive.

Posted by Absent Librarian at 8:11 PM