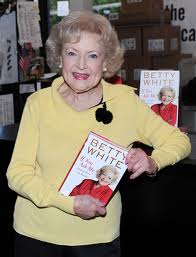 It-girl Betty White delivers a hilarious, slyly profound take on love, life, celebrity, and everything in between.
Drawing from a lifetime of lessons learned, seven-time Emmy winner Betty White's wit and wisdom take center stage as she tackles topics like friendship, romantic love, aging, television, fans, love for animals, and the brave new world of celebrity. "If You Ask Me" mixes her thoughtful observations with humorous stories from a seven- decade career in Hollywood. Longtime fans and new fans alike will relish Betty's candid take on everything from her rumored crush on Robert Redford (true) to her beauty regimen ("I have no idea what color my hair is and I never intend to find out") to the Facebook campaign that helped persuade her to host "Saturday Night Live" despite her having declined the hosting job three times already.


This was a perfect read after the heavily themed books I have been immersed in as of late.  Is it too stalker-ish to say...I LOVE BETTY!!!  I have been a fan of hers since the mid 70's.  Of course, back then she was simply known as the funny lady.  Through the decades she has become THAT funny lady, to Rose and finally to her own self...Ms. Betty White.
I simply adore how she carries herself, strong, unwavering in her beliefs and yet never seems to take life too seriously.  She looks like she enjoys life and the people she finds there. She also expresses her gratitude for the good fortune she has had during her career and for the opportunities this has allowed her to pursue.  Her love of animals and devotion to working with organizations for their protection and care is impressive and admirable. But it is the way that she speaks of her own pets over the years and her descriptions of her personal encounters with animals that tugs at my heartstrings and makes me want to adopt her.

This is a light read that I  finished in two hours. I found Ms. White's style soothing and reassuring.  I hope to have even one quarter of the goodness, understanding and graciousness that she displays.  If you are a fan of Betty White, from any generation, pick up this, or another of her books.  It is like having a conversation with her over tea or while sitting next to her on a plane ride - a momentary gift that will enhance your day.

Favourite quotes from If You Ask Me:


“Animals don’t lie. Animals don’t criticize. If animals have moody days, they handle them better than humans do.”

"Bets, you can lie to anyone in the world and even get away with it, perhaps, but when you are alone and look into your own eyes in the mirror, you can't sidestep the truth. Always be sure you can meet those eyes directly. Otherwise, it's big trouble, my girl."

Betty White is an entertainment icon who has playing starring roles on The Mary Tyler Moore Show, The Golden Girls, and Hot in Cleveland, hosted Saturday Night Live (as the result of a fan-driven Facebook campaign), and spoken out on behalf of animals for many years.
Posted by Absent Librarian at 11:43 AM