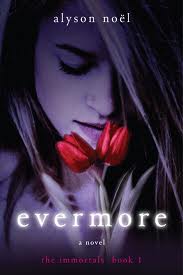 Since a horrible accident claimed the lives of her family, Ever can see auras, hear people's thoughts, and know a person's entire life story by touch. Going out of her way to avoid human contact and suppress her abilities has branded her as a freak at her new high school—but everything changes when she meets Damen.

Damen Auguste is gorgeous, exotic and wealthy. He's the only one who can silence the noise and random energy in her head—wielding a magic so intense, it's as though he can see straight into her soul. As Ever is drawn deeper into his enticing world of secrets and mystery, she's left with more questions than answers. She has no idea just who he really is—or what he is. The only thing she knows to be true is she's falling deeply and helplessly in love with him.
Evermore, Book #1 in the Immortals series

My first impression of this book was that I was heading into a volume from a soap opera.  It may have been the names of the characters: Ever.  Damen Auguste. Haven. Riley.  My second impression was that I had picked up another book from the Twilight trend in YA Fiction.  Innocent girl, new in town meets mysterious hunk with a dark side. I like Noel's writing but I felt several times that I had been there, read that.  The absence of him actually being a vampire was a nice touch.  Ever grieved and grew during the course of the book and her reactions to her abilities felt honest.

I read Evermore in a single sitting.  It was an easy read and an enjoyable one.  I am curious about where this story will go in subsequent books but am not in any rush to run out and get them.  I also read the companion series written about Ever's sister, Riley. I may be more motivated to continue reading the Immortals series had I not just finished the fourth book in the Riley Bloom series.  I may just need a break from Noel for a while.

Posted by Absent Librarian at 8:23 PM