Social workers are joining librarians to provide help where it's needed

“A lot of homeless people actually have jobs and have families and need resources, so they use libraries.” says Eric Weissman, a sociology professor at College of New Caledonia in Prince George, B.C. 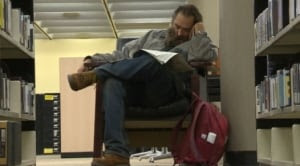 “Libraries have always been that central place, that community centre. It’s one of the mandated qualities of libraries...It’s a last stand...the Alamo of urban space for the homeless.”

At least five libraries in Canada employ social workers to work with the homeless. (CBC News)

​Homeless people were using the library, but staff were having difficulty coping with the complexity of their needs. “They have issues bigger than the librarian can answer for them.”

Having the social worker on site has made a difference, says library spokeswoman Michelle Jeffers (San Francisco)

Libraries provide more than shelter from the elements.  They offer access to information, entertainment, services and a sense of community.  Libraries often have a line in their policy to assist anyone and do so in a way that demonstrates respect and offers dignity to patrons.  Whatever attitudes people may face elsewhere, libraries can, and should, welcome, inform and inspire all those who walk through its doors.
Posted by Absent Librarian at 5:56 AM