Finding Books that Look Like You: Gender roles in Books

While staff seems to accept and even embrace stories where girls break the old gender barriers by being independent and adventurous and (gasp) being the hero, I still face resistance to books such as My Princess Boy by Cheryl Kildodavis. It's a process, as they say.  I will continue to slowly introduce 'controversial' titles as long as they are well written and have a valuable message.

Add your favorites in the comments.  How do you deal with resistance on 'sensitive' topics? 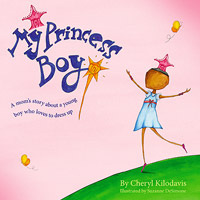 Here are some other titles that challenge the traditional expectations of gender roles in children's books.

Boy, Can He Dance!
By Eileen Spinelli.
Tony doesn't want to become a chef like his father. Instead, he wants to dance.

By Clyde Bulla.
Gregory does not have anywhere to grow a garden, so he creates one of his own.

Posted by Absent Librarian at 6:00 PM