The 10 Most Bizarre Pieces Of Literary Merch

Just in time for Christmas...what do you get that hard to buy for bookphile?
Try one of these, um, unique items.

Reposted from the litreactor.com July 2012 article by Kimberly Turner.  http://litreactor.com/columns/the-10-most-bizarre-pieces-of-literary-merch 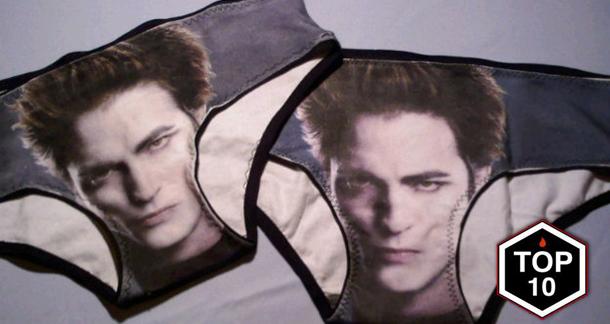 Books aren't just books anymore, and authors aren't just authors. They are—as obnoxious and bizspeak as it sounds—"brands," and they're being marketed as such. So if you're sick of hearing about Fifty Shades of Greynow, wait until your aunt asks for Fifty Shades lingerie this Christmas. CopCorp, which bought the licensing rights to the series, anticipates adult toys, key fobs, men's ties, jewelry, fragrances, and "appropriate services." (I shudder to think what that means.) After all, it's not such a stretch to assume that if you enjoy the book or author, you'll buy the T-shirt, coffee mug, or bookmark. But what about the panties, shower curtain, and Ouija board? Literary merchandise is not as straightforward as you might think. Here are ten of the most bizarre book tie-ins... 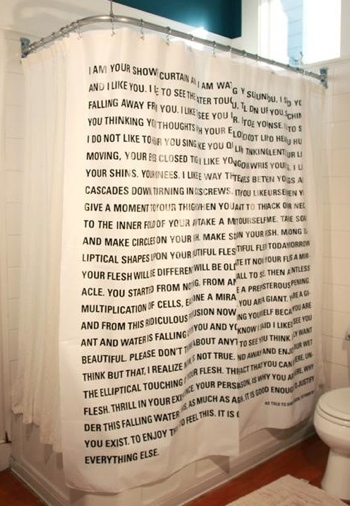 Are you like me? Do you find yourself sitting on the can—extra-soft Charmin by your side, germ-ridden reading material at the ready—thinking, "Man, there's only one thing that would make this bathroom experience better, and that's a Dave Eggers shower curtain"? No? What if that shower curtain featured a monologue told to Dave Eggers by HIS shower curtain? Come on. That's so many shower curtains, all trying to make you happy. All that's missing is a picture of a stapler.
I'm not even going to sit here and try to be cool with you. Here's the truth: I own this item. I got it for my birthday because my friends are all too aware of my Eggers fandom. Go ahead and judge me. I'll wait... Okay, so while you were being all judge-y, my shower curtain told me, "I shield you. And I like you." So I'm fine with your disparaging glances.
Price: Your shower curtain can enhance your self-esteem for $65. 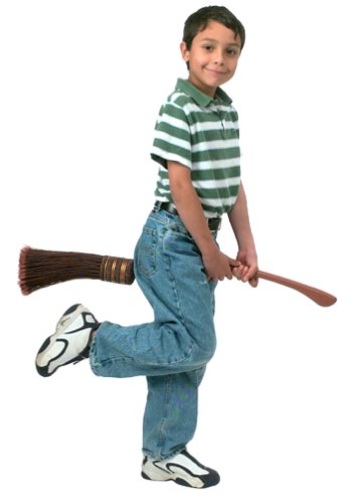 Somewhere there's a Mattel executive who deserves a high-five but probably got a pink slip instead. I'm talking about the one who attended a meeting about a grooved broomstick designed to go between children's legs for "easy riding," and said, "What's missing here is a vibration feature." That master of marketing suffered the indignity of seeing the vibrating Nimbus 2000 Electronic Broomstickget yanked from store shelves shortly after its launch when parents complained that their daughters enjoyed the battery-operated toy a touch too much.
The "real flying sensations" had the magical ability to persuade females of all ages to take a joy ride into Harry Potter world, and the product earned glowing Amazon reviews: "When my 12 year old daughter asked for this for her birthday, I kind of wondered if she was too old for it, but she seems to LOVE it. Her friends love it too! They play for hours in her bedroom with this great toy ... My oldest daughter (17) really likes it too!" Chamber of Secrets indeed.
Price: Discontinued, try searching eBay for magic crotch rockets. 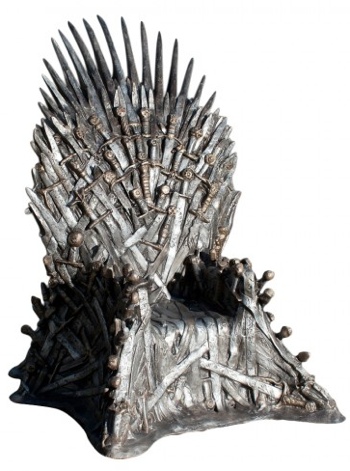 You know what really brings a room together? A 350-pound throne made of 1,000 swords taken from your enemies. I know, I know, you're all like, "Hey, I've got soccer practices to attend and reality television to watch. When am I gonna have time to slay 1,000 foes?" Realistically, you're not. That's why HBO did the work for you, modeling a seven-foot replica of the seat of kings from George R.R. Martin's novels out of hand-painted fiberglass and fire-proof resin. It might not have the best lumbar support, but your in-laws will learn to respect your authority in a hurry.
Price: $30,000 plus $1,800 shipping. 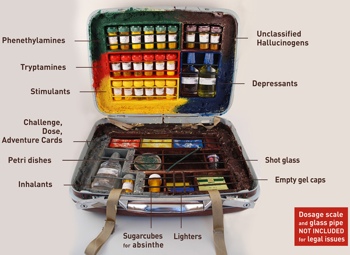 'Fear And Loathing' Board Game

Created by artist Jonathan Baldwin, this Hunter S. Thompson–inspired board game has it all: stimulants, depressants, inhalants, unclassified hallucinogens, activity cards, and challenges such as "While one person flicks the lights on and off rapidly, try to catch three soft objects thrown at you." Although most of the substances are fake and the game was never mass-produced, the rules and cards are available on Baldwin's website, so with a good drug dealer, a healthy lack of self preservation, and a bit of craftiness, one could easily make a DIY version (a la Cards Against Humanity).
Price: $3,500 according to boardgamegeek.com. 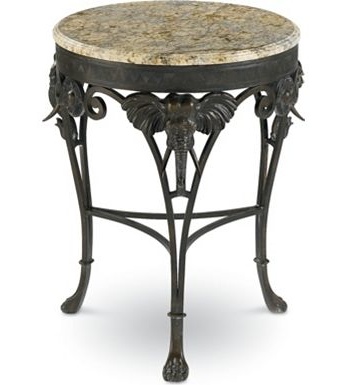 You've grown your beard out, donned the iconic turtleneck sweater, drank yourself blind, and divorced your third wife, but still don't have a publishing contract. What to do? The next step in your Single White Female–esque Hemingway obsession is to dispose of your current IKEA furnishings and replace them with Thomasville's Hemingway collection.
Start with the hideous Trophy Horn Table (which the Thomasville website explains is tied to the animal trophies Hemingway took during his 1934 East African safari) then maybe add an Elephant Accent Table (they had to stretch to explain this one: "In 1927, Hemingway published a collection of short stories in a book entitled Men Without Women. In this book there was a story called 'Hills Like White Elephants.' While this story really did not have anything directly to do with elephants, Hemingway did subsequently see and experience elephants in their native habitats when on safaris") and, of course, finish with the Hemingway Writing Desk. Then sit back and wait for the Pulitzers and Nobel Prizes to roll in.
Prices: From $400 to $4,099 depending on piece. 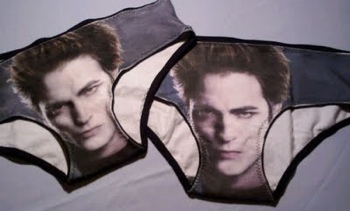 'Twilight' Between Your Legs

If you're looking for officially licensed Twilight merch, there's no shortage of jewelry, life-size cardboard vampire cutouts, and action figures. But let me tell you what's wrong with all that: None of it goes anywhere near your crotch. Fortunately, the crazies of the interwebs are problem solvers. Twilight condoms will ensure you don't end up with a vampire fetus eating your womb and then some disturbed fan making a felt model of said damaged womb. Fan-madeEdward Cullen panties with an image of actor Robert Pattinson's mouth on the inside (what's creepy about that?) will ensure you never get laid by an actual human male. And a ghastly pale Twilight-inspired dildo called The Vamp (link NSFW, obvs) retains cold so you can "toss it in the fridge for that authentic experience." A perfect gift for the discerning necrophiliac. Try to forget this is all based on young adult fiction. 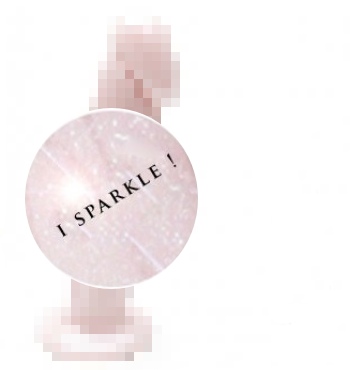 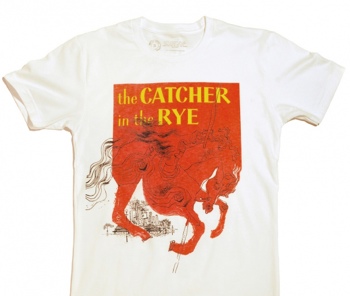 'Catcher In The Rye' Shirt For Toddlers

Why wait for your toddler to hit puberty before becoming an angst-ridden ball of alienation and confusion? Get your tiny Holden Caulfield on the road to the asylum early with this adorable Catcher In The Rye toddler tee. To solidify your little bundle of joy's youthful disillusionment, be sure to play him lullaby versions of The Smiths and Morrissey. If you're lucky, his first word will be "phony" and he'll be promptly expelled from his first prep school.
Price: $19.95 plus your child's sense of joy. 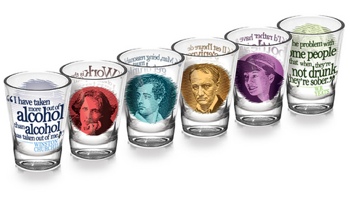 Look, I'm not saying literary greatness can't be achieved without alcohol. It happens all the time. What I am saying is that if I had a time machine and my druthers, I'd put Hunter S. Thompson, Norman Mailer, Truman Capote, Jack Kerouac, William Faulkner, James Joyce, Edgar Allan Poe, Oscar Wilde, F. Scott Fitzgerald, Ernest Hemingway, Dorothy Parker, and Charles Bukowski into a room with a single bottle of whiskey. Then I'd use a two-way mirror to watch them duke it out. Oh, and they'd all be in the prime of their youth to level the playing field. There might also be a single weapon, but something lame like a Nerf wiffle ball bat. These are the kinds of things I daydream about.
Alas, I do not have a time machine (nor do I have my druthers most of the time), so the best I can do is this Dorothy Parker martini glass with "I like to have a martini. Two at the very most. Three, I'm under the table. Four, I'm under my host!" etched into it.
For more extreme displays of lushness, I can move to the Great Drinkers Shot Glass Set, featuring images of Churchill, Byron, Baudelaire, Yeats, Parker, and Wilde along with booze-related quotes. Justify your drunkenness by claiming you're some kind of kindred spirit of these literary greats, then go browse Reddit or something.
Price: Martini glass, $12.95. Shot glasses, $15.49. 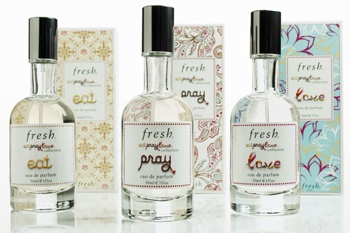 Remember Elizabeth Gilbert's 2006 memoir about escaping her materialistic NYC lifestyle to go on a spiritual journey around the world? It's all about soul-searching and finding fulfillment and breaking free of the shackles of consumerism. What really complements a book like that? A shitload of pricey merchandise and a marketing plan designed to convince unfulfilled middle-aged women that they can buy their way out of unhappiness. From $19,795 tours of India to a whole collection of costume-y Sue Wong kimono-looking things to perfumes, tea sets, fugly scarves, and lip gloss—the anti-consumerist book was so pimped out, it should've been called Eat, Pray, Buy.
Prices: Vary from fairly cheap to ridiculously pricey, depending on product. 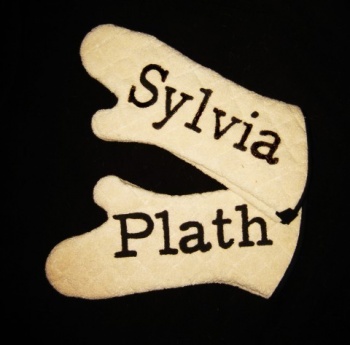 Now I'm not known for my political correctness, but there's a line society draws in order to maintain common decency and good taste. It's that smudged mark you can see about ten feet behind me right now. It is disrespectful enough that emo kids with "I am. I am. I am." tattooed on their lower backs know more about Plath's suicide via oven than they do about her poetry. But creating oven mitts bearing her name? Well, that's a whole new level of uncouth, isn't it?
Then there's the Ouija board. Plath and her husband, Ted Hughes, were known to consult the spirit board now and again, and the tortured writer even penned a poem entitled "Ouija." So despite the goofy Miami Vice color scheme, the Sylvia Plath Ouija board seemed harmless enough at first glance. Then I noticed the planchette. Yep, that's an oven. Hold a séance using this, and I hope Plath haunts the shit out of your apartment forever. 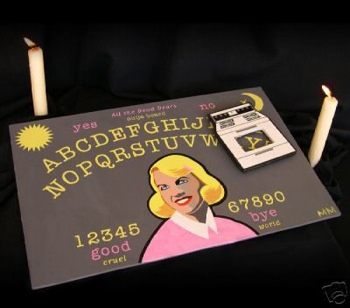 Price: Oven mitts are $28 on Etsy when available (they aren't currently). Ouija board costs your eternal soul, if you can find it for sale.
Would you buy any of this stuff? Do you own any weird lit merch?
Posted by Absent Librarian at 7:06 PM